“This is a great news for all of us, as he is truly one of the world’s best living poets, and it is wonderful to have the attention that this prize brings in the media be focused on poetry again,” said Ilya Kaminsky, Poetry International’s Editor-In-Chief.  It’s too bad that according to this Washington Post article (and this writer’s own unsuccessful trip to Barnes and Noble) his collections are out of stock. While Amazon had been out of stock, “for at least a week,” you can now buy his collections at Amazon (click here to read the Amazon preview of Tranströmer’s The Great Enigma). For those of you who don’t already own his books, P.I. has you covered. First off, click here to read a Washington Post article that dates back to the second of April 1986 profiling the 2011 Nobel winner, called The Poet and His Double Life: The Psychology of Sweden’s Tranströmer. We’ve found seven poems and various articles that you can enjoy.

Enjoy a selection from Tranströmer’s contribution to Issue 15/16 of Poetry International, Grief Gondola #2, below:

I
Two old men, father-in-law, Liszt and Wagner, are staying on
the Grande Canal
together with the restless woman who is married to
King Midas
he who turns everything he touches into Wagner.
The green chill of the sea pushes up through the palace floors, (Transtromer, 336).

To read the rest, click here to buy Issue 15/16. Follow the link and scroll down to issue 15/16 and click on Add to Cart. His poem, Grief Gondola #2, included in 15/16’s Swedish Poetry Feature, edited by Malena Mörling and Jonas Ellerström.

For your next Tranströmer fix, we’re heading over to Poets.org, who have two of his poems translated by the amazing Robert Bly. Thanks to Poets.org, you can read “Outskirts” and “After A Death” from The Winged Energy of Delight: Selected Translations by Robert Bly (2004).

Thanks to Poetry Foundation, we can read three more of Tranströmer’s poems from his book New and Collected Poems, translated by Robin Fulton (1997): “National Security,” “The Indoors Is Endless,” and “November in the Former DDR.”  We can read his poem Sketch in October from his 2006 collection The Great Enigma translated by Robin Fulton at the bottom of  this ABC News article. 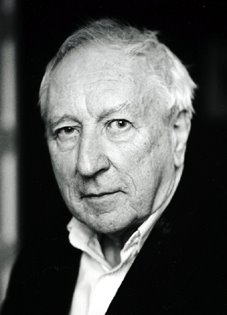 On the Nobel Prize website they say that they were motivated to award Tranströmer the prize, “because, through his condensed, translucent images, he gives us fresh access to reality.”  Tranströmer, “lost the ability to speak and the use of his right arm through a stroke more than 20 years ago.  But he still expresses himself – through music, by playing one-handed piano. And that is how Tomas Tranströmer will accept his prize in Stockholm on Dec. 10,” (click here to read more at ABC News).

“Like a glass-blower by a wintry sea, Tomas Tranströmer has been slowly and painstakingly making poems in his native Stockholm since the early 1950s,” notes John Freeman at NPR (Read the rest of this article at NPR by clicking here). “He attended the University of Stockholm, where he studied psychology and poetry. One of Sweden’s most important poets, Tranströmer has sold thousands of volumes in his native country, and his work has been translated into more than 50 languages,” (read the rest at poets.org by clicking here).

Poetry Foundation says, “Tranströmer’s poetry, building on Modernism, Expressionism and Surrealism, contains powerful imagery concerned with images of fragmentation and isolation. ‘He has perfected a particular kind of epiphanic lyric, often in quatrains, in which nature is the active energizing subject, and the self (if the self is present at all) is the object,’ notes critic Katie Peterson in the Boston Review.”

“In his debut work,” notes John Freeman from NPR, “the modestly titled Seventeen Poems, published when Tranströmer was just 23, the Swedish poet imagined Thoreau in the woods, ‘disappearing deep in his inner greenness/ artful and hopeful.’”